The falling of one leaf heralds the arrival of autumn. Golden ears of wheat wave in the fields, while gorgeous maple leaves scatter along the path. From summer to late autumn, lush greenery becomes golden. Warm sights of fall were infused into jewelry this season. As far as the eye could see, romance and affection permeated the air, making it difficult for us to live up to the brilliant jewelry as well as the golden autumn.

The high jewelry collection Les Blés de Chanel, inspired by wheat, pays homage to Gabrielle Chanel’s fond memories of the wheat from her childhood. The ears of wheat, fully bathed in the warm sunshine, exude a charming fragrance that permeates the countryside and indicates the crop is ready to be harvested.

The annual festival, held at the end of the summer, is a symbol of abundance and renewed prosperity since the harvests were plentiful and the granaries were full. Impression de Blé earrings in 18k white and yellow gold are set with two pear-cut diamonds to bring out the fine texture of wheat, for a total weight of five carats, combined with fancy-cut multicolored diamonds and brilliant-cut ones.

The initial idea for Bvlgari Wild Pop High Jewelry collection was ignited when Bvlgari’s Creative Director, Lucia Silvestri, visited the Andy Warhol Foundation for the Visual Arts in New York City. To reveal the rapid development and bold imagination at present as well as pay tribute to the special bond that grew between Bvlgari and Andy Warhol – the King of Pop Art – the Wild Pop High Jewelry collection presented pieces of jewelry featuring the unconventional and avant-garde.

Breaking the rules the Bvlgari Pop Way, this Happy Leaves necklace taps into the rich vein of inspiration from the herb and captures the leaves with 14.63 carats of diamonds and over 5.60 carats of emeralds pavé-set in white gold, interpreting people’s imagination of hedonistic life in the 1980s. 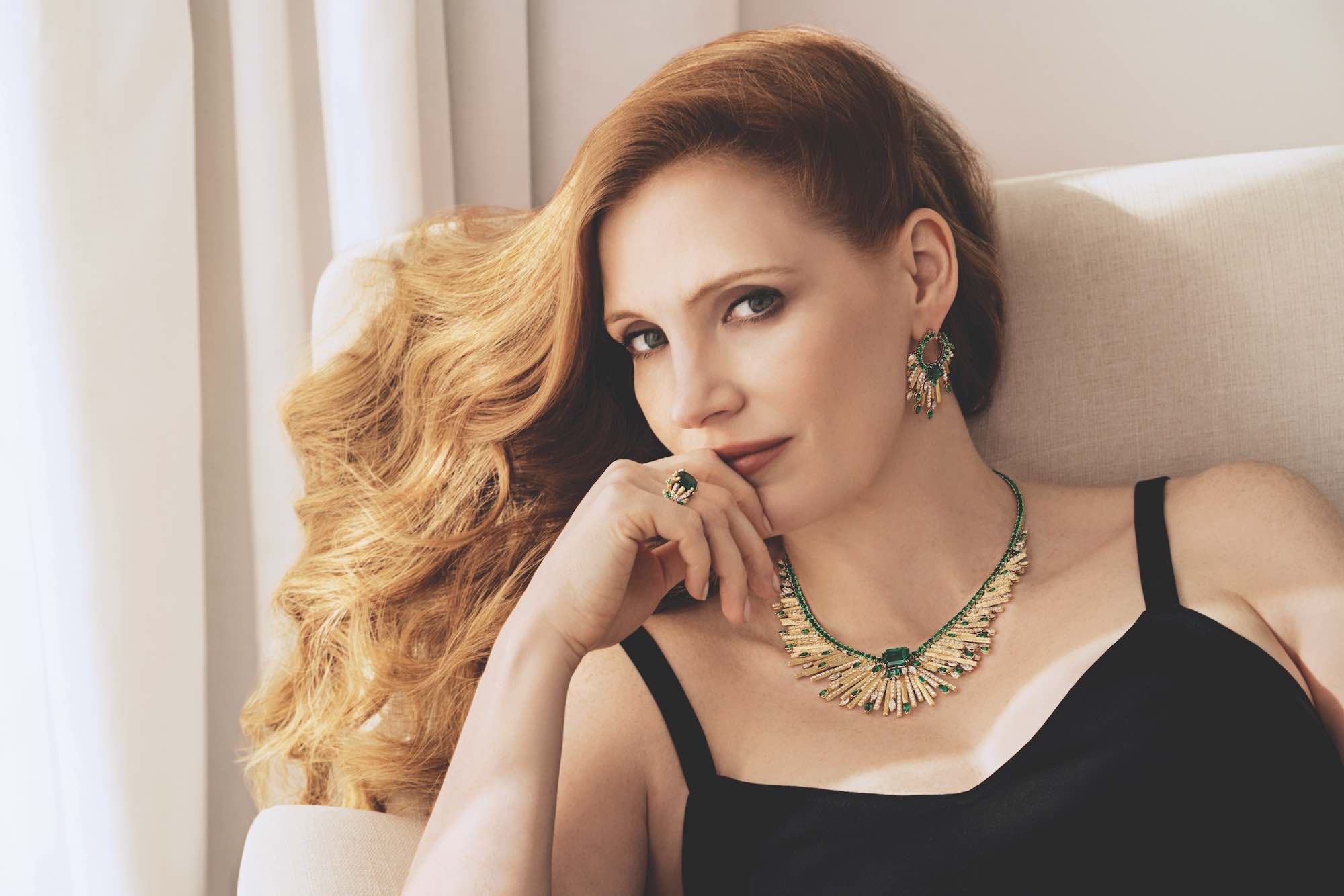 The necklace displays the “Palace decoration” which involves hand- guilloching gold with irregular streaks to give the effect of raw silk, resulting in a supple and fabric-like appearance. The Sunlight Escape collection, created by cut-down setting, gold polishing and diamond setting, displays the High Jewelry collection with particular brilliance. 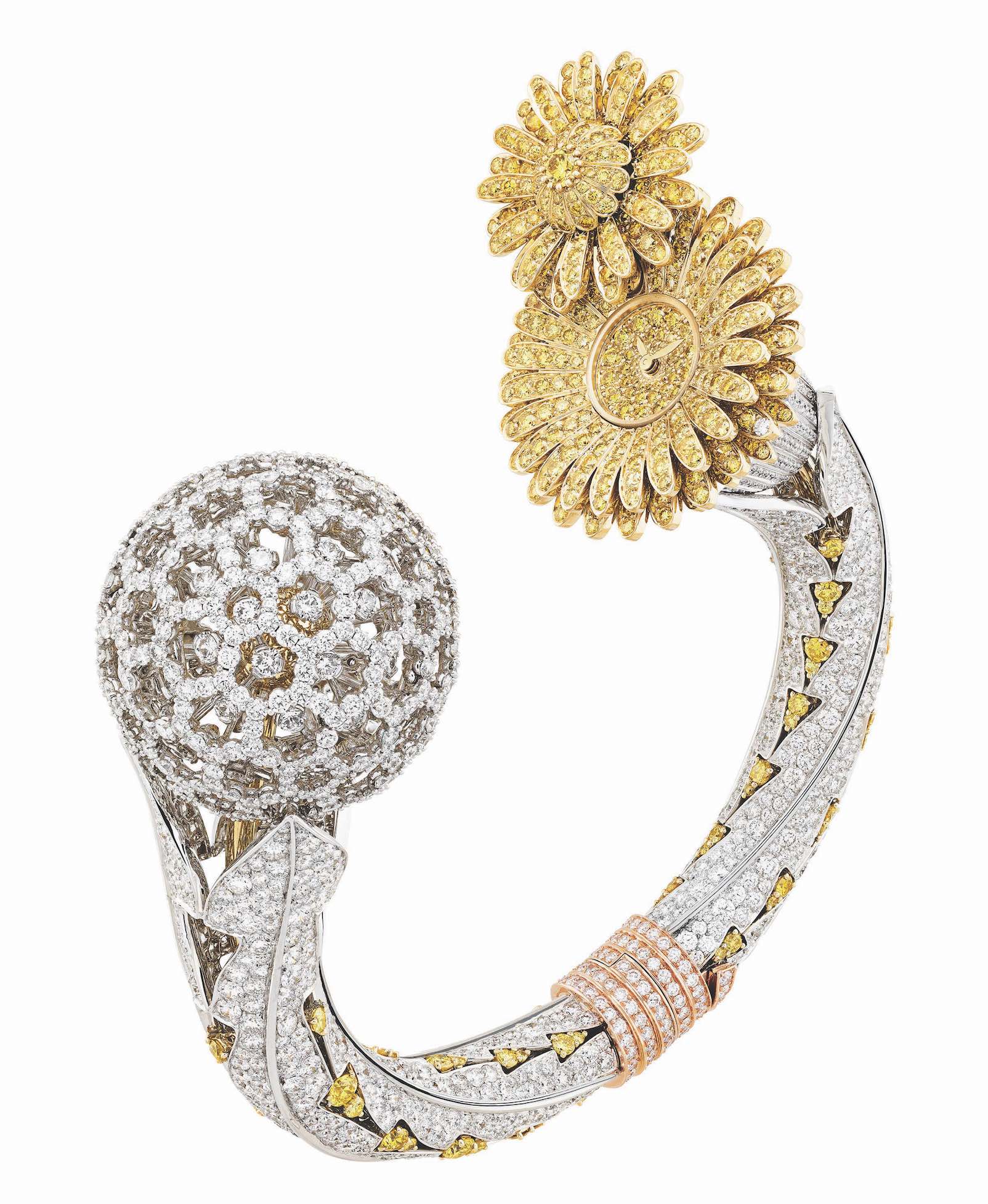 Genuine jewels and enchanting timepieces. This year, the Maison has contributed all their excellence to the jewelry-making savoir-faire of High Jewelry watches. Secret, the Maison’s long-cherished theme, has been instilled into the unique Dandelion Secret watches with dials hidden under diamond flower buds.

With twin motifs embellishing each end of a torque bracelet, this unique watch pays homage to the wild flower’s dual nature. White and yellow diamonds alternate along the bracelet to recreate the outline of the leaves, before adorning the feathery seeds and petals respectively. While the corolla’s heart pivots to reveal a sun-colored dial, flowers shelter the time beneath precious petals to disclose the mystery of time faintly.

An iconic symbol of divinity set with a diamond to represent a diffusion of the sun’s energy to create life, a medallion radiates with the sun-like energy of a three-carat yellow diamond, set on a sautoir chain of yellow round brilliant diamonds, white marquise-shaped and princess-cut diamonds suspended between white pavé motifs. With a detachable central and outer motif, the medallion can be worn as a pendant, brooch or on its sautoir chain.