It’s all about the art of surprise and wonder, the inexorable desire to create. This year, Richard Mille unveils a new watch that embodies the vitality of the brand’s commitment to the feminine, featuring an in-house automatic tourbillon movement. The mechanism incorporates an automatic tourbillon that is slim, ultra-high performance and enhanced with sparkling diamonds, mother-of-pearl, onyx and black sapphires.

“We are known for our incredibly technical, high-performance watches that draw inspiration from the automotive and aeronautics industries, even though women’s watches have represented a considerable percentage of our sales for several years now,” shares Richard Mille. “That said, we needed a modern, creative and talented young woman to inject new energy into our status quo and take the women’s collection to new heights. It was Cécile Guenat, the daughter of my friend and business partner Dominique, who met this challenge by overcoming technical obstacles, freeing herself from consensus and establishing a unique and resolutely contemporary style.”

To understand more about the progress of creation, one must go back three years to the beginning of the adventure, when Cécile – now Ladies’ Collection Director – was asked to join the company and design new creations. The challenge proved irresistible for the young woman who earned her spurs in the world of fine jewelry. After graduating from the Geneva School of Art and Design (HEAD), she gained experience with a jeweler in Lausanne, then with a London jewelry designer, where she designed collections for a number of Couture houses and branded designs. From initial sketches to the choice of stones, Cécile Guenat demonstrates the meticulous attention to detail that conjures luck by sheer talent and passion. 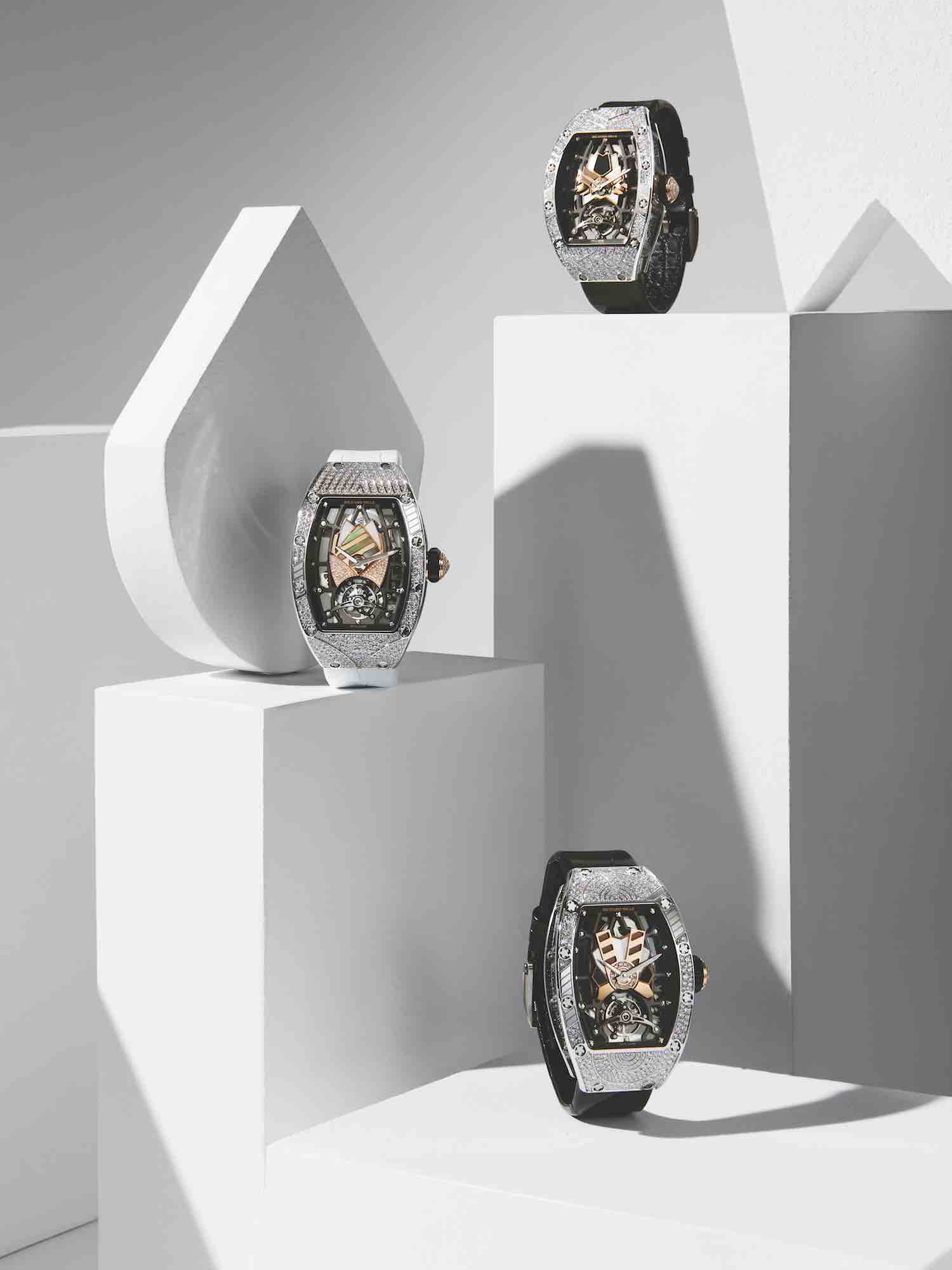 Talisman. It’s a name that evokes nothing less than magical protection. The watch collection was born from a magnetic alchemy at the intersection of tribal arts and art deco.

“My work is the fruit of very different influences. In designing this collection, I drew not only on art deco, but on the Tribal arts – masks, African sculptures – whose impact on all great modern and contemporary artists has been enormous,” confides Cécile.

“The contrasts, geometry, and sacred character of these objects fascinate me all the more because they prefigured today’s design through the fusion of content and form.”

The notion of a collection took shape very early in the initial sketches. Thus emerged a number of interpretations, with 10 different variations on the case and dial. Cécile chose to glorify the skeleton movement through the many possibilities for setting and engraving the case. Heightened by sparkling stones, the shape of the dials reveals two deliberately distinct worlds, one that is organic and the other more urban.

A masterpiece in every sense, the RM 71-01 Automatic Tourbillon Talisman abolishes the distinction between jewelry and its case. The movement, dial and case maintain an aesthetic, technical and visual dialogue in each version.

“Yet to truly put the launch in a class of its own, we needed to combine the exceptional design with technical prowess, hence the brand’s very first automatic tourbillon movement!” explains Richard Mille. “It is not the existence of this specificity that is of principal concern so much as the extraordinary technical characteristics – the performance, reliability and breathtaking finishes.”

With this horological tourbillon, the brand inducts the Caliber CRMT1, its eighth, in-house caliber. The baseplate protecting the tourbillon’s rotation remains open to preserve transparency. Skeletonized and tonneau-shaped, with a thickness no greater than 6.2mm and a weight of just eight grams, the Caliber CRMT1 – housed in a case of white or red gold – is clothed in titanium.

Throughout the workshops there is an agreement: beauty must be such that the self-evidence of the finished piece erases the painstaking labor and hours spent at the workbench.

“The first challenge was to produce an automatic tourbillon movement that could be housed in the narrow, curved case of an RM 037. The second was to meet all our standards in terms of performance, be it chronometric results, automatic winding or shock resistance,” explains Salvador Arbona, Technical Director for Movements.

“Far from a fragile item, this ladies’ watch is designed to be worn day-in day-out, precisely because it has an automatic winding mechanism. Its architecture is unobtrusive enough to bring the dial, hands and accessories to the fore.”